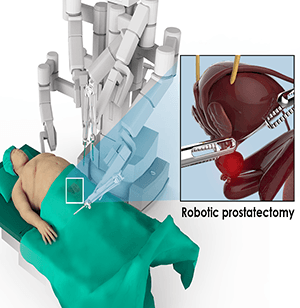 What is Robotic-assisted Laparoscopic Radical Prostatectomy?

Prostate cancer is malignant cancer that can spread to the lymph nodes, bones and other parts of the body. It is a common cancer in older men and can be fatal.

Robotic radical prostatectomy is a minimally invasive approach to surgically remove the prostate gland, along with the seminal vesicles which are attached to it. The urethral stump is then sutured to the neck of the bladder to allow urination.

Robotic radical prostatectomy includes two machines, a control unit or the surgeon’s console and a patient unit. The surgeon sits at the control unit, away from the operating table, and controls the movement of four robotic arms of the patient unit present near the operating table. One of the robotic arms holds and positions a 3D high-definition camera through the incision in the operated area and provides images of the operation site to the surgeon at the control unit. These images are high-resolution 3D images and are magnified 10 to 12 times. The other three robotic arms are used to hold small miniature surgical instruments that are introduced through the tiny (8 mm) incisions over your abdomen. Precise removal of the cancerous tissue with a border of healthy tissue reduces the chances of recurrence of prostate cancer.

Robotic radical prostatectomy is a new advanced laparoscopic approach that overcomes the limitations of the traditional open as well as the laparoscopic approach. It provides the necessary tools for the surgeon to perform complex surgery through tiny incisions, with precision and ease, improving the outcome and reducing complications.

The miniature instruments used in robotic radical prostatectomy are more flexible and have a greater range of movement compared to the long-handled rigid instruments of the traditional laparoscopic surgery. The robotic arms minimize tremors that may occur from the unintended shaking of the surgeon’s hands. The enhanced vision and superior control of the micro-instruments can help in the precise removal of the prostate without damaging the nerve fibers and the blood vessels near it, which are critical for the maintenance of bladder control and erectile function.

This technique provides a state of the art treatment approaches for the management of prostate cancer to allow quick recovery and control of sexual and urinary function in most patients. It also provides additional benefits of less blood loss, less pain, shorter hospital stay, faster return to normal routine activities and a lower incidence of complications.

The neurovascular bundle that contains nerves that innervate the erectile apparatus of the penis runs around and in close proximity to the prostate gland. If the prostate cancer has not grown to the outside of the prostate gland, the surgeon can gently peel the nerves away from the prostate gland so they are not damaged during prostate removal. Protecting these nerves means there is a higher chance of recovery of sexual function, there may also be a quicker return to full continence.

After the surgery, you will wake up with a urinary catheter tube placed in the bladder through the urethra. There will also be a drain tube from the abdomen to allow drainage of gas and fluid from the operation site.

You should be able to eat and drink normally and get up and walking the next day. The drain tube is also removed.

Most patients are able to go home the day after their surgery. You will return home with the catheter in place to drain your urine. Most men need a urinary catheter for 5-10 days after surgery.

You will return to the hospital 7-10 days after the operation for a dye test to confirm the water pipe is fully healed on the inside before the catheter is removed. Please bring some continence pads with you to the hospital to use after the catheter is removed. Most patients will have some leakage of urine initially, but this rapidly resolves in most cases. All patients should practice kegel exercises to accelerate the return of normal urine function.

Your doctor may prescribe medication to help restore your erections. This can improve the odds of good erectile function after surgery in appropriate men.

You will need to resume your activity level gradually. You should be back to your normal routine in about four to six weeks.

You won't be able to drive for approximately two weeks after going home. Don't drive until your catheter is removed, you are no longer taking prescription pain medications and your doctor says it's OK.