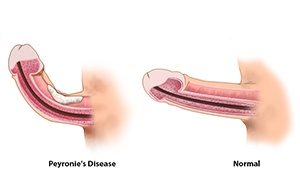 What is Peyronie's Disease?

Peyronie’s disease is an abnormal curvature of the penis due to scar tissue, called plaques. The penis is made of three tubular structures; two corpora cavernosa that fill with blood to cause erections and the corpus spongiosum that contains the urethra, where urine passes. Scar tissue that develops on the tough walls of the corpora cavernosa contracts and pulls the penis out of it usual alignment. This can be minor, where it does not interfere with urination or sexual function, or severe, and a major quality of life issue. Some men have multiple areas of plaques or complex plaques that pull the penis in multiple directions.

The cause of Peyronie's disease isn't completely understood, but it is thought that it generally results from repeated injury to the penis. Trauma may be caused due to vigorous sexual activity or injuries from sports or accidents. Most men cannot identify a specific injury that causes their disease.

Peyronie’s disease usually occurs in two phases. The first phase is called the active phase. During this phase the plaque is actively growing and pulling the penis. The penis may be painful and the curvature changes over time. Currently there is no proven treatment to stop the progression of active phase disease, although several treatments can be tried. Usually this phase lasts less than a year.

After the penis has stabilized it enters the chronic phase. The plaque is mature and no longer changes. During this phase the curvature can be treated and expected to remain stable. Some men develop calcium deposits within the penis during this phase, which can complicate treatment.

You may notice curvature of the penis, shortening of the penis, pain or difficulty with intercourse, and in some cases, erectile dysfunction.

A physical examination of the penis can diagnose Peyronie’s disease. Any man who is considering treatment for Peyronie’s disease should undergo an in-office erection assessment. While photographs taken at home can aid diagnosis, a direct assessment by your treating surgeon is essential for understanding the options available to you. This test is performed by injecting a small amount of medicine into the side of the penis to cause an erection. The injection is performed using an insulin style (very thin) needle and causes minimal discomfort. This is usually effective even for men with pre-existing erectile dysfunction.